It was in the early nineties that I discussed the term “interventionist” for the first time. Curator Sabine B. Vogel had used the term to describe the work of artists she had invited to a group show in the Vienna Secession, Oppositionen & Schwesternfelder. Dan Peterman, Joe Scanlan and the minimal club were part of the exhibition, as was I. The Wochenklausur was working next door on their very first project. In contrast to them, we, the artists in the group show, were strongly opposed to the term “intervention”, and pointed at the history of the word in futurist circles, who distinguished the anti-war futurists from the pro-war futurists – the interventionists. 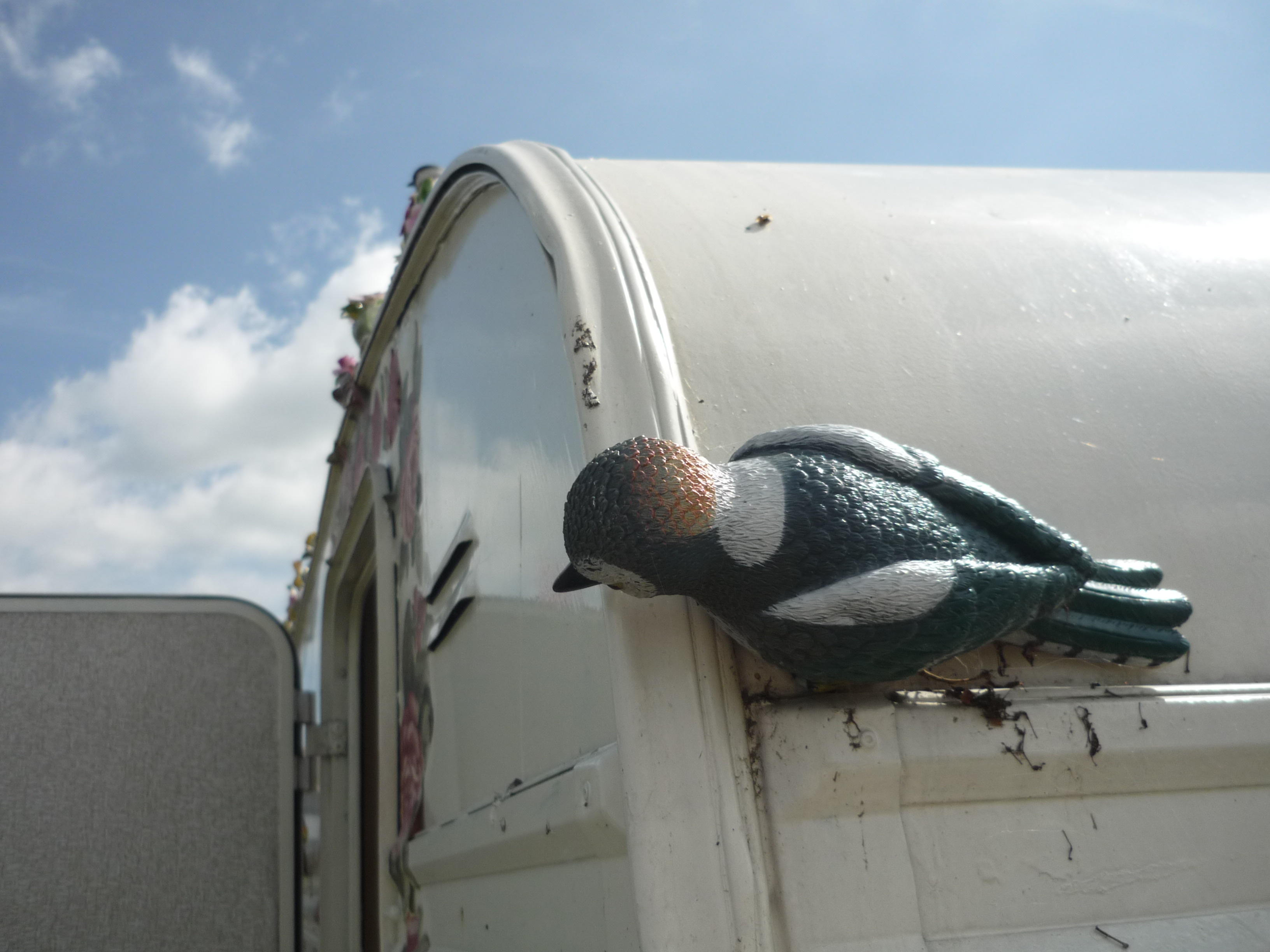 Later, with the war in Yugoslavia building up, the term became part of the green new-speak, rhetorically camouflaging the NATO bombings. At the same time it made a career in the lingo of NGOs, along with a banalized handbook breed of systems theory, to adapt social work to the neoliberal reality of decreasing financial support. “Crisis intervention” is the word favorized in this millieu, and I believe it is not by chance, that the languages of the military, of politicians, NGOs, artists and management-consultants become alike.

Now we, a group of artists and architects connected to the EU-funded Rhyzom project, are driving through a military camp in Ballykinler, a small village near Belfast, and home of the British Army regiment “2 Rifles”. Here, in Northern Ireland, cities and communities are still divided in the year 2010. In Belfast so called “peace walls”, 4 to 6 meters high, separate Loyalist from Catholic areas.

With us in the minibus is artist Anne Marie Dillon, who lives and works in Ballykinler – and was never before allowed to enter the army base. But today we are treated in a different manner, as our group of international artists is operating under the identity of EU culture. A 2-Rifles-Regiment officer with communicative skills welcomes us with tea, biscuits and an introduction, emphasizing the changed role soldiers have today. The troops just returned from operations in Afghanistan. In a few weeks they will go for training in Kenya.

The officer has prepared a slide show for us EU culture guys, stressing the cultural competences of his troops. A slide entitled “What did we do?” informed us about the extended concept of a soldier’s task – “Soldier First” it said, “but also: Spokesman, Policeman, Humanitarian, Diplomat, Mayor”. While slides of kneeling Soldiers discussing with Afghans were shown, the officer explained: “It is something you normally don’t think about doing as a soldier. Discuss questions like: where the school should be, where local care should be delivered – within a local community…. When you go to a place where there isn’t a structure in place – although you are not making the decisions – you are the one corralling this together. To say: Where are we? How are we going to do this? Getting them to make the decisions. But actually providing that forum, and the ressource, to make these things happen.” 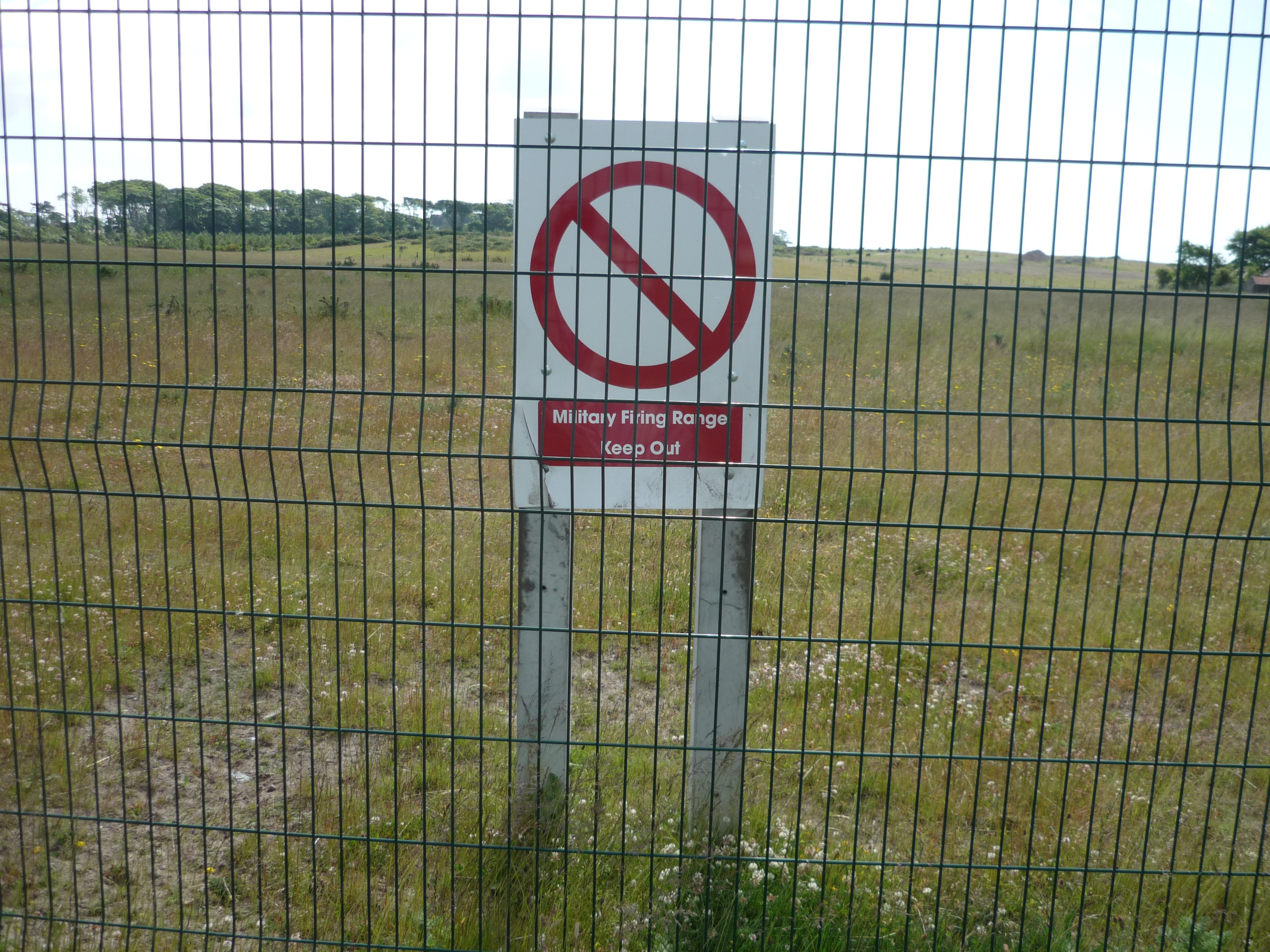 Apparently, the Rifles had been transformed into a regiment of armed social workers, a kind of Wochenklausur in uniform – equipped with soft skills to make the locals participate. “Cultural Training is really important. And it’s something we put an awful lot of effort into, to understand the local culture, to understand the way you are percieved, and that everything you do influences other people. It is being able to be in a completely different culture, and being able to understand, what you are doing. And also – not all of this culture is the same – people have different viewpoints locally. We’re calling it The Human Terrain, in lack of a better phrase. When you arrive in a new area, in Afghanistan – and the same is true in Iraq – trying to get a feel for hundreds of years of history. Different bits – why so-and-so isn’t talking to so-and-so, and never put these two people into one room together… – all of that – we’re asking an awful lot of our people, to get that right. It’s a key thing of what we do – because one wrong meeting, one wrong thing that you say can put you back a long way.” Feeling, cultural sensitivity, accepting difference, self-reflexivity – not much longer and the officer and us would have gotten deeper into an open exchange about tools and methods between interventionist practitioners…

And this is not by chance: There is an instrumentalising spirit going through a certain breed of public art projects. After shaking off the restrictions of the white cube exhibition space, there seems to be an irresistable urge to re-oedipalize oneself by emulating the style, perspective and scale of values of a social service provider, or, even more problematic, that of a provider of economic solutions. “Art in context”, “mediation”, “target groups”, “empowerment”, “success control”, a clean separation between us and them, the normal people, the locals – this is the terminology used in the proposal prose of NGOs and New Genre Public artists alike. I hate all this. I think, these words represent a totally corrupt attitude to the world. So when I wrote my first flyer for Park Fiction, back in 1995, I used the word “Interventionist Residents”, to describe the activities of our group. And an interventionist resident group is, who we met in Ballykinler. 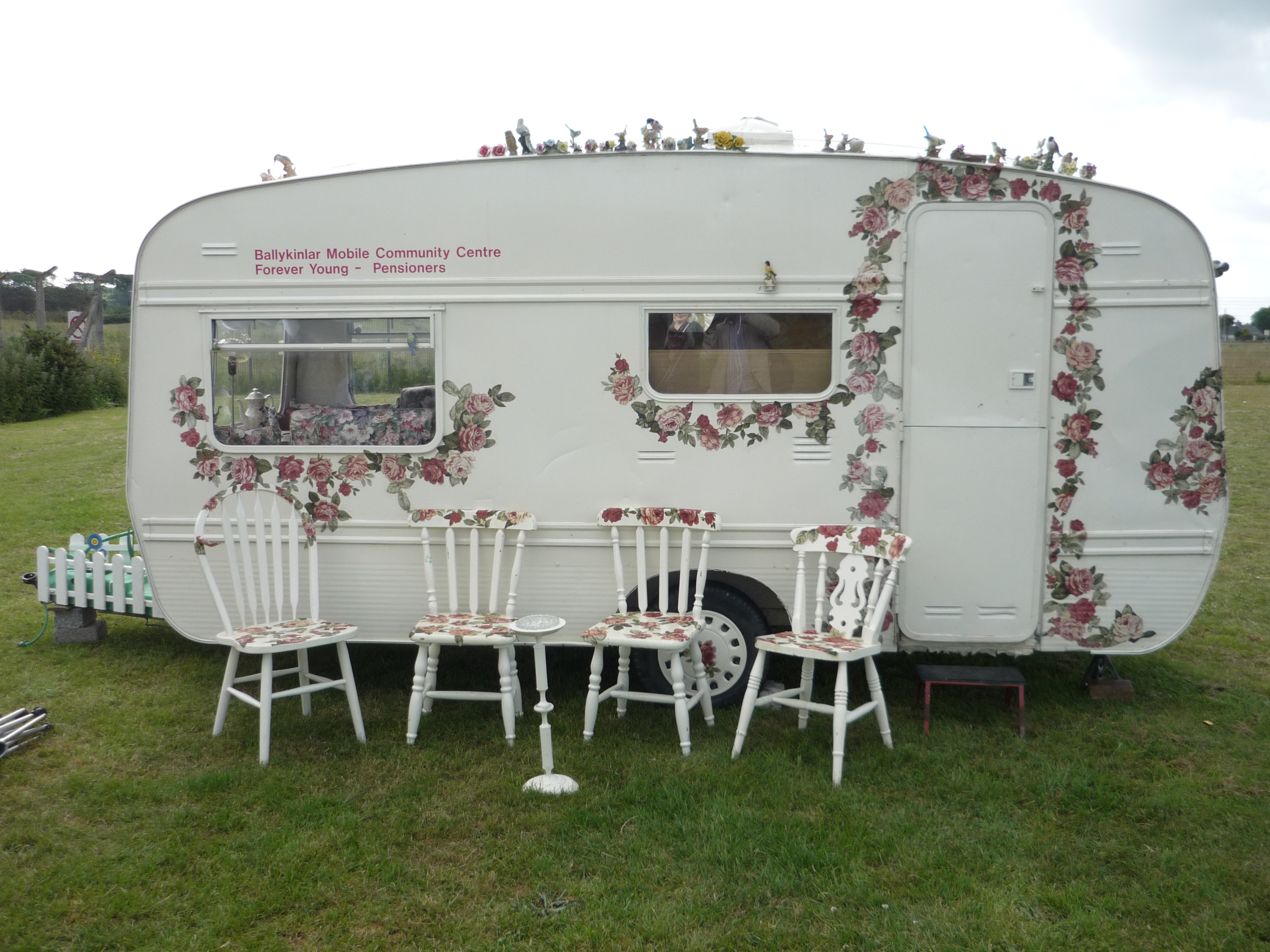 I refuse to think about Anne Marie Dillon and The Forever Young Pensioner’s work in “effective” terms. Yes, they have created a tool, a weapon, a machine. Yes, they are a group explicitly integrating Catholics and Protestants. Yes, their work does escape given categories of artwork. And yet, that is nothing less than the classic task of art since the Renaissance – to redefine, with each work, what the boundaries of art are. To test the limits and go over the border, when the need arises. Exactly that is what the work manages to achieve. 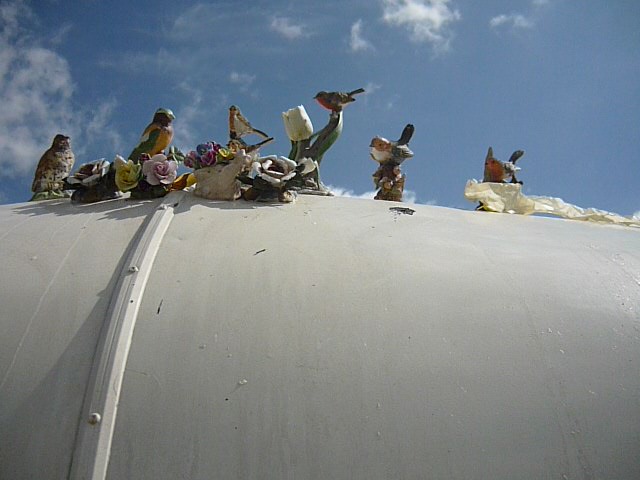 A.M. Dillon and the Forever Young Pensioners demand a community center for Balinkynlar. Instead of complaining about the lack of building, they just started the community center – in a used caravan. They park it in different places in town, place chairs around it when the weather is fine, make tea. And discuss. Maybe this began for practical or propagandistic reasons. But it has gone far beyond this – the Forever Young Pensioner’s caravan speaks a symbolic language that tackles the big social and political issues and the deep cultural frictions at stake. The caravan is decorated with an exuberant collection of ornaments: sculpted flowers and birds, porcelain animals and angels. Inside, the seats are padded in rose pattern, and the roses have also found their way to the outside of the caravan. The sweet ornaments and heavy bouquets don’t just stay snug in the secure privacy of the interior – they’re winding vinelike to the outside, they cover and decorate the hub cap, the coachwork. Groups of delicate ceramic birds congregate on the rooftop, peep around corners. The flowery CI covers chairs and tables placed outside the caravan. Yes, this work is much more a rhizome – than a “work”. 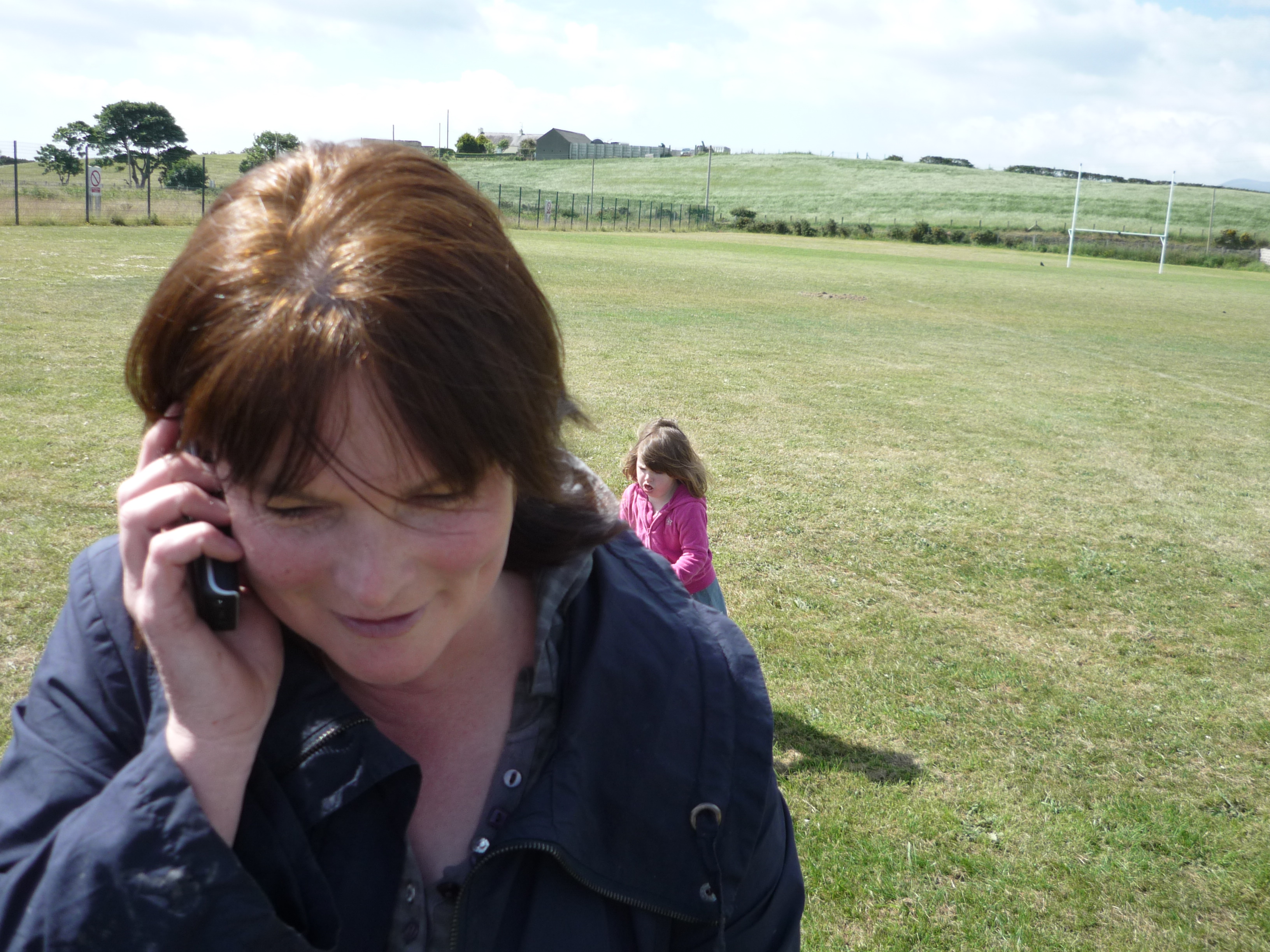 All this would be remarkable, even in a different, less politically contested context, as a work of art in its own right, transgressing the border between the private and public (a quality, which, in the humble view of the author, is a sign of greatness in an artwork, be it David’s “Marat”, Gordon Matta Clarke’s “Bingo” House). The Balinkynlar Community Center Caravan, thus, turns the intimate, the feminine, outside. The ornament – which, according to Adolf Loos’ modernist patriarchal doctrine – is a crime. 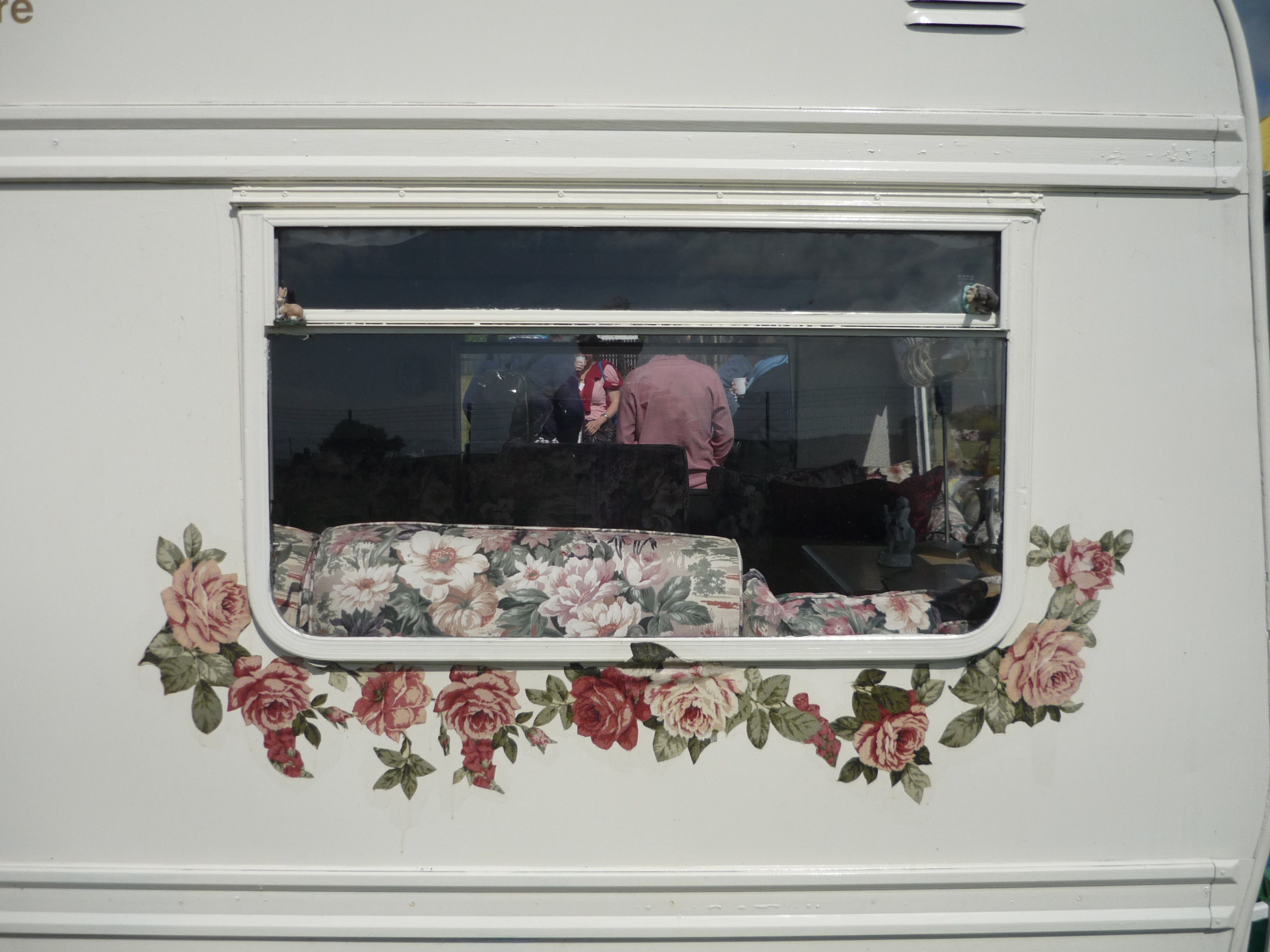 But the meaning of the caravan goes even deeper. What do you do in a country, where the classical routes of political self-organization and militant collectivity have gone so far, for such a long time, that they have lost their integrity, their emancipatory potential?

A.M. Dillon and the Forever Young Pensioners suggest new ways, how to voice dissent, without trodding down the same old beaten track. They constitute a parallel space of exchange, a center on the move.

The Pensioner’s style of “aggressive cosiness” renders unspoiled forms of collectivity – the private tea party – accessible – as a source of political action. A winding rose – that has thorns. 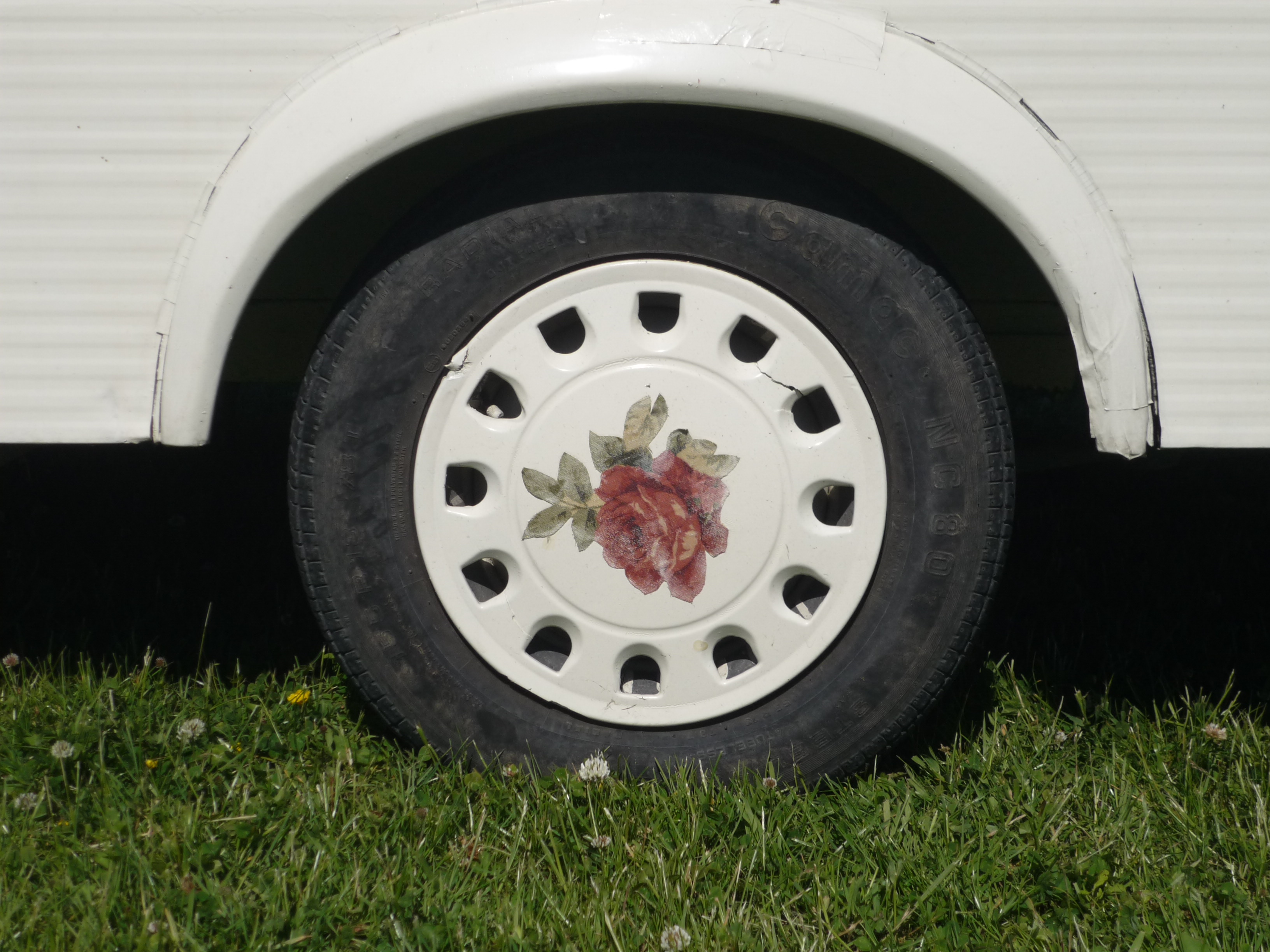 Published in: Trans-Local-Act, Cultural Practices within and Accross;