The City is Our Factory is a visual essay in 158 drawings. In six chapters, the artist Christoph Schäfer develops a rhizomatic history of the urban space: From primordial mud to the “Right to the City” movement in Hamburg in 2009. With water ink pencils he retraces Henri Lefebvre’s concepts of space, the “Urban Revolution” anticipated by the French philosopher in the 1970s. In his theory, in the postindustrial age the city itself is turned into the central locus of production. In a society in which a differentiation between passion and work, privacy and professionalism is becoming increasingly difficult, the struggle for the city turns into a struggle for the means of production — a new struggle for the Right to the City.
Content:
Lefebvre 4 Kids 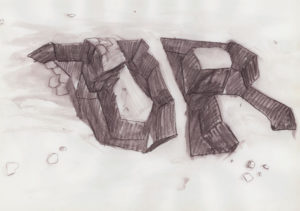 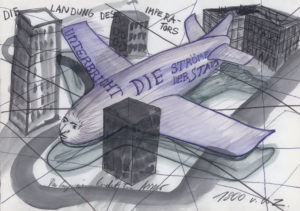 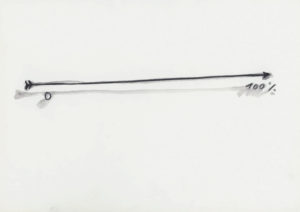 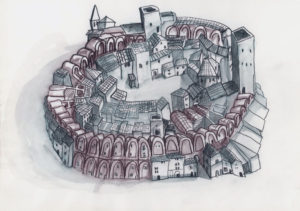 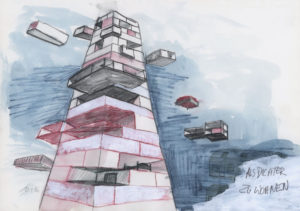 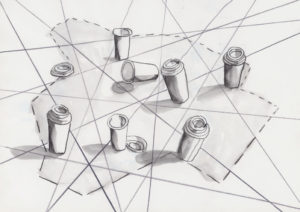 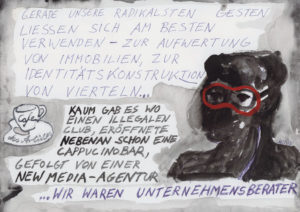 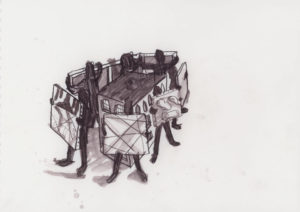 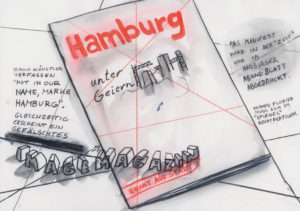 The evening I would like to have on Film 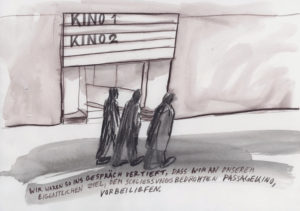 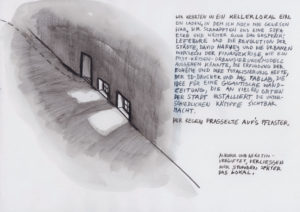 …when we began carrying paper cups of hot milk and coffee through the streets.

Maybe already earlier: people tell the story of how Manchester began regenerating, or rather reinventing itself in the very moment the first restaurant owner had the crackpot idea of putting chairs out into the rainy streets of the northern industrial town in the end of the 1980s.

For me it had started in Café Regenbogen (Rainbow). One could read the „Radikal” there and it was 1983. Of course this coffee-drinking habit was influenced by the Parisian Bohème and its existentialist street cafés. Consistently, the drink was called café au lait and was served in white bowls.

Some part of it (Bohème, literature) must have transported itself to the United States and influenced the founding of Starbucks (Seattle). My first visit to Starbucks was, of all places – in Vienna.

Its Indian counterpart is called Barista. The one located in Calcutta’s Park Street in 2003 had an acoustic guitar which you were allowed to take from its hook on the wall and next to it, it had a sign saying „Play me”.

The moment when things start talking to you and ask you to participate. When something inside the store goes beyond consumption. The café as stage – more than that: the guest as producer.

The promise of a world waiting to be designed by me; in which my thoughts, affectations, ideas could find some resonance. A world open to be appropriated by me.

The Indian guitar tells me all this. And something else. It very clearly defines the scope within which my participation is desired. By saying „Play me”, it tells me that the rest of the location does not want to be played. This café is not a game, has no poetry and needs your poetry. Keep it here. Put it into the café’s context. Here, your creativity is not embarrassing, but legitimate. Don’t just carry it out into the streets – put it into this context of the creation and utilisation of meaning.

Spaces encourage actions. They prohibit other actions. I’m writing these lines into a sketch book in a café in the Schanzenviertel which used to serve as a hangout for the Hamburg School. The city is our