first published in: Fight Specific Isola – Art, Activism and the Future of the City

The dream city, as it should be for a dream city, is located on an island; separated from the centre by a train station, in the shadow of a postmodern tower building, outdated already long before it’s completion, as it – with it’s arched gables and antiqued columns – could have appeared in Ayn Rand’s film /Fountainhead/ as a warning monument. Aesthetical, artistical, ecological, social and political corruptness is nowadays posing in a different garment, with a whole new arsenal of weapons which to analyse is the actual purpose of these lines. But this has to wait.

The Island was still contaminated with the chemicals from the firm Brown-Boveri, forgotten and neglected over decades and nevertheless (or exactly because of this) an urban paradise emerged, which no one could have ever dreamed of: It had an arcade, as in Walther Benjamin’s “The arcades project”; it was a place of multitudes as Negri & Hardt themselves could have never pictured more beautiful. It inhabited differences, contradictions even, in a density, that Georg Simmel, Henri Lefebvre and the Situationist International would have to do a reunification-dance of happiness; and on the sides of this grubby palace of dreams and devaluated practices, there are to all extent two parks that turned the abandoned and then revitalized Factory /Stecca degli Artigiani/ into a magnificent castle. Although a castle without a master or lords, instead animated and used by motorcycle mechanics, artists, craftspeople and a Sans Papier from Africa; by self organised action groups, handicapped-organisations, trotskyist, marxist, and hedonist adolescents, a self organised whole-food-shop, a movie theatre, exhibitions, clandestine pleasures and public celebrations, a gray market, sunbathing on the roof and by the people living around it.

It could have kept going on like this and Milano would have deserved and needed a place just like this. But the outlook was dark from the beginning. Because the rulers interested in the demolition of this situation were pushing the scale with their assembled weight ruthlessly to one side; they had the economy, they owned the properties, they controlled a large part of the media, the law was- as always – on their side and the administrative and political power was in the reactionary hands of Forza Italia and Lega Nord.

The strategic pound, which the users of the Stecca could bring to bear, was the broad and deep network into the district and their inventive talent inspired by the art. 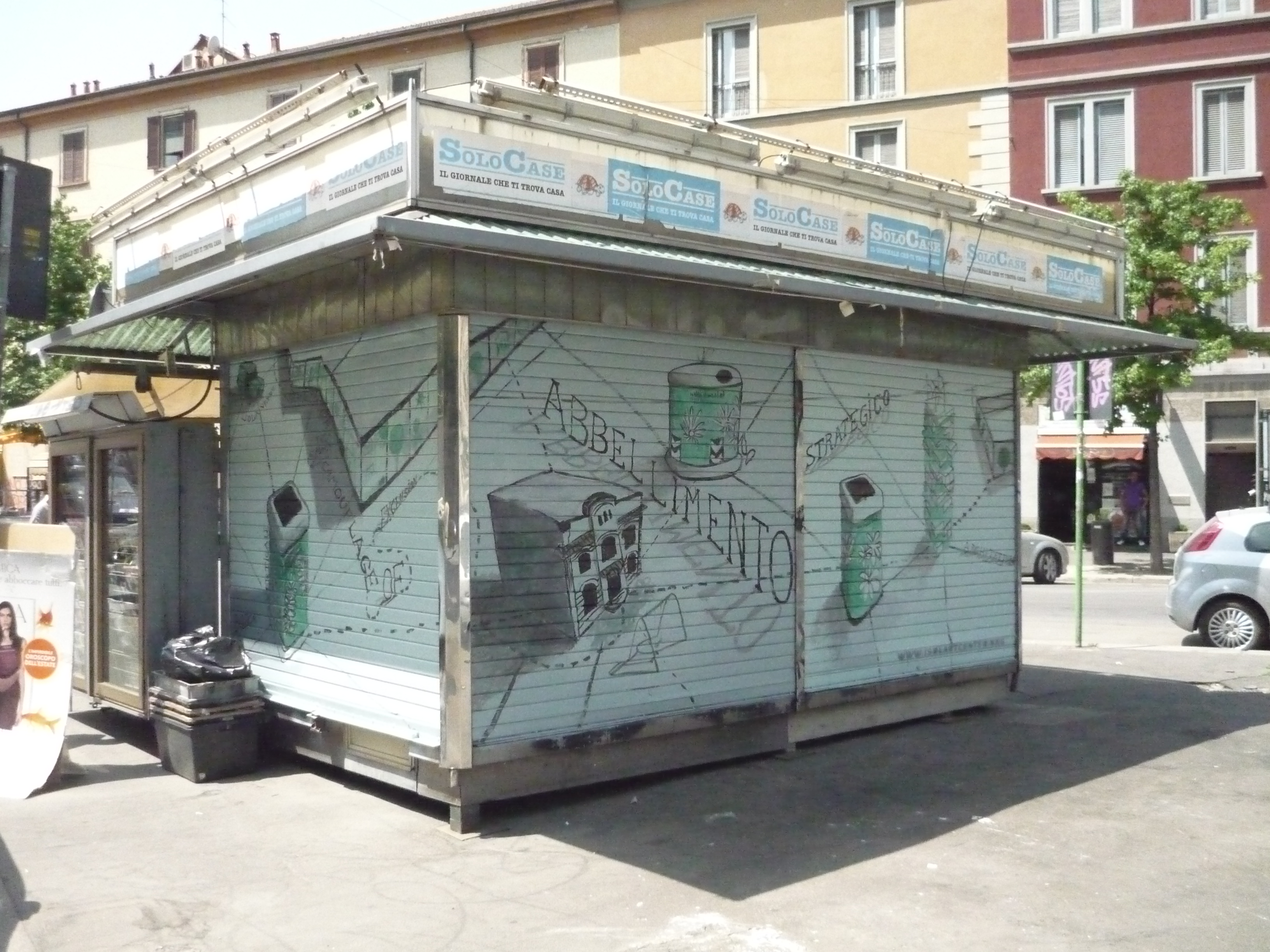 The argument of art weighed especially heavy – because the Isola Art Centre planned and provisorically run in the Stecca for years did not only do great work – it filled a hole for all of Milano, the desire to have an exhibition space for contemporary art outside of the commercial galleries, the established museums and foundations. In Germany for example – and the Italian artists know this – every small town has an art society, basically an independent exhibition space. In Milano this does not exist. But the practice of the Isola Art Centre went even further than the described examples of exhibition spaces: it was a place where ideas developed elsewhere of an uninvited art of interference with urban structures, self organised and collective, found an echo, were picked up and developed further.

The artists, cooperating with the residents, managed to make the Isola Art centre talk-of-the-town, they organised alternative plans to the demolition plans of the investors and turned the surrounding fallow land into parks decorated with sculptures (no hippiecrap if you would think so, it was sharp and cutting-edge).

Together the community created a social and ecological resource for the district, planted illegally immigrated palm trees, organised productions of desires and planning-workshops with children and adults, founded OUT (the Office for Urban Transformation), sang songs by Adriano Celentano to the decisionmaking city officials (in a choir in the courtroom) when they did not understand – and that way shifted the weight and the public opinion more to their favour.

* The strategy of the bastards

But the rulers were not dump and if they could not convince the island residents of their contemptuous plans maybe they could at least be divided: /divide et impera/ was already over 2000 years ago a household word in this area of the world.

The attack was launched exactly in the field that the island residents had successfully dominated till then: the field of the critical, socially committed, politically interfering art.

The key role in this /plot/ was played by the architect Stefano Boeri, who made a name for himself as a critical artist through his work with the group /Multiplicity/ (who’s most popular work, the video installation “Solid Sea” seems in retrospective like a target-group project cleverly designed for the political correct art scene, without any connection to the social movements it actually exploits.)

At first Boeri pretended to be a supporter of the “Stecca degli Artigiani”, spoke at an activist panel saying that the situation in the Stecca is absolutely worth preserving and that he would fight for it. But Boeris words were not worth a penny. Only a few months later, he provided a contradictory Master plan assigned to him by the city council of Milano for the international investor Hines, sold the result to the public as a compromise – and was rewarded with a big piece of the cake: the architect was commissioned with the planning of two high risers on the area of the former parks. Of course Boeri planned, like his predecessors, the complete demolition of the Stecca, the buildings in the two parks and, as a concession-candy to the occupiers (so the frog can easier be swallowed), a spectacular art centre in a Boeri architecture.

Sadly the result is known: parts of the action group let the politicians wrap them around their fingers, the police pushed drug dealers into the quarter and launched a cleansing campaign against the Stecca and the remaining resistance was not strong enough to prevent the ensemble from being torn down.

*Participation as a disguise of exclusion

Now gentrification, the only urban development model of the prospering cities around the globe, is floating over the isola. But still the Isola Art Centre has not given up, but moved it’s activities into the quarter, reanchored and multiplied them.

In 2009 I had the luck that Bert Theis invited me to one of the exhibitions of the Centre and was able to bring a painting onto the blinds of the central kiosk. The “mural” deals with the “built ideology” [1] of the new investor’s architecture and reads the coffee grounds of these urban everyday landscapes. Their language, of this I am convinced, reveals a lot about contemporary Italy and even more about the changing front lines of the future of neoliberal urban development. 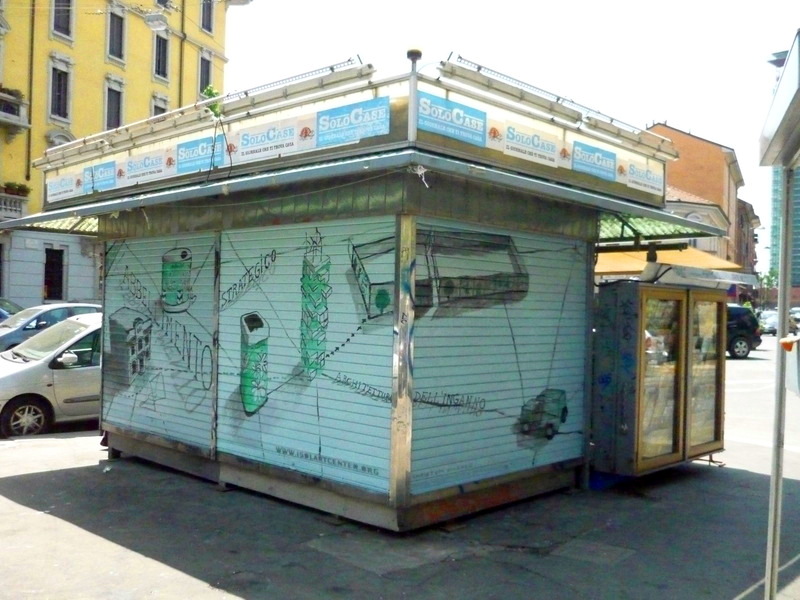 As I walk through the streets, I notice two new types of green: On the one hand it is the wastebaskets that have recently been decorated with pretty pictures of nature which, I assume, are supposed to suggest that the rubbish thrown into these baskets will be somehow recycled, hence will be magically be removed from the pollution process and turned into raw materials. Astoundingly these new dumpster covers are very similar to the advertising-wallpaper of the “Isola Verde” “Green Island” projects of the ecologically interested curator action group /amazelab/ who, according to usually well informed rumours, occasionaly accept money from real estate investor Catella to collaborate on the “commercial disrict isola”.

The second type of green that I run into has a more threatening nature – it is the colour of the camouflage of the jeeps and military uniforms of the soldiers that have recently begun to patrol the streets, together with the police. Military on patrol in the cities – that is a measure only taken in democratic countries when, because of an acute state of emergency, the democratic laws are suspended. Or during an attempt of a putsch.

The permanent presence of the military sets a general mood, which lets everything shine in an even more threatening light.

On the hoardings around investor Hines resp. Catella’s major building site we find a different kind of camouflage: The investors have had children make models for a playground during an educational participatronizing project. Now there are photographs of these models built by children blown up to the size of billboards decorating 500 meters of hoardings. The usual steel-glass investor architecture is proceeding behind the touching children’s art, preventing the people passing by from viewing the building process… 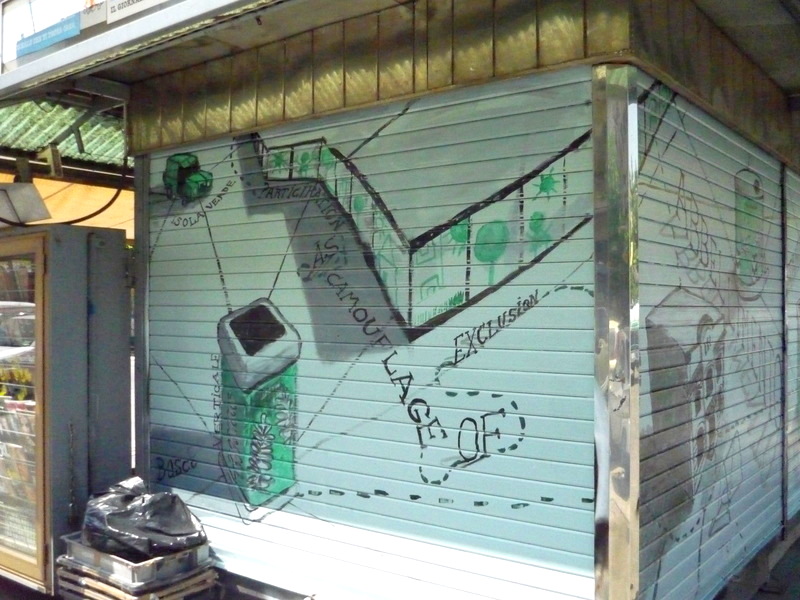 …of towerblocks such as Boeri’s “Bosco Verticale”, two skyscrapers decorated with trees in the style if the Dutch architecture of the mid-nineties. The architect claims that his tower, hidden in a vertical forest, produces even more green space than ever have existed on the open spaces that disappeared. Rarely the blind belief in the own architectural omnipotence was shown more clearly than in this project, in which the watering of the plants can only be ensured with a great supply of freshwater – if it can be ensured.

Maybe the computer-generated pictures of the ecological houses were only a propaganda trick anyway to keep the ecology argument at a distance for a while. Like in hardly any other building, the Bosco Verticale is showing the start of the “green” gentrification, escorted by Greenwashing.

In all of these cases the participation works as camouflage. Art as a tool of deception and nature as the Trojan horse. The people of Paris had already found a fitting phrase for this type of capitalistic beautification in the middle of the nineteenth century: they saw the stylish building operations, the glorious Boulevards of Baron Haussmann for what they truly were, as embellissement stratégique – as a strategic beautification.

But where an image is being painted, an image can be destroyed. Let’s stop being nice. Let’s get to work.

Fight-Specific Isola. Art, Architecture, Activism and the Future of the City.

In italian or English

Fight-Specific Isola traces the long history of the Isola area of Milan and the organic, spontaneous progress of the Isola Art Center over the past 12 years. Featuring texts and many images, the book tells the story of an artistic and urban transformation, led by artists, who often had to invent tools and concepts along the way. This publication serves as an example of how to act on the ground in today’s urban condition. Different narratives of history, artistic intervention and action allow the reader to trace the complex idea of collectivity, solidarity and fight-specificity. Testing new terms such as dirty cube and dispersed center this book shows a possible way to respond to the constant pressure of neoliberal development and gentrification. 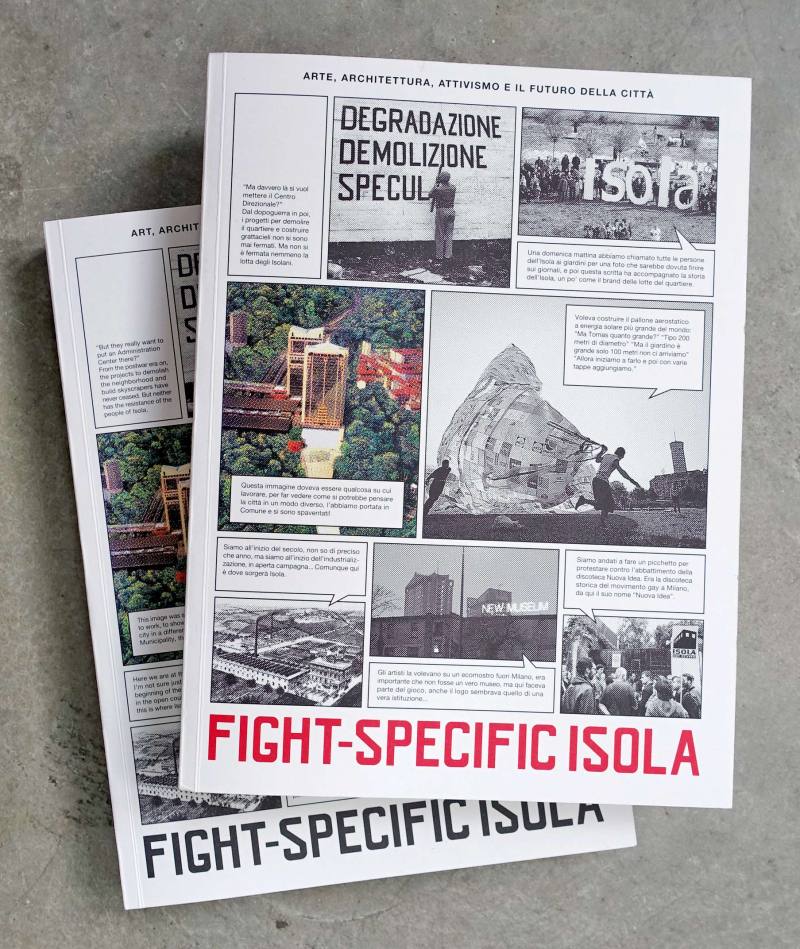 To order the book please write to: info@isolartcenter.org