In the recent urban struggles, people gather in public spaces – and alter them. They occupy public gardens and squares with their bodies, develop a new sense of common, of outer parliamentary politics. One could see these movements as attempts to reconfigure the private/public relation. One day, desires will leave the house and take to the streets.

Salon Public Happiness explores these relations and invites cultural producers who are part of these struggles. In the context of occupy and Right to the City movements, they develop new ways of recording, distributing and working – with the private, the imaginations that come from the every-day-life.

Inhabited space, the space of every day life, is a devalued sphere – a blind field, according to Henri Levebvre as well as to the feminists of his time, suspicious to those in power. The cities of every day life are dominated by them, the global forces, economy, religion, politics, entertainment, science, while the houses are evacuated, upmarketed, gentrified, erased. The common places disappear, the voices and visions and memories are silenced.

“Public Happiness” is a phrase coined by the American revolutionaries of the 18th century. The term was born out of the experience of those American people, who assembled, discussed and acted together, and who finally shook off the colonial rule. According to Hannah Arendt, the phrase “Pursuit of Happiness” found it’s way into the first amendment of the American constitution because of this collective practice. The original meaning, however, is now forgotten: Western society still is marked by a sharp division of private and public spheres, with happiness clearly seen as a private affair, while the notion of public normally appears as a bureaucratic category, visible in the functional, standardised, boring character of public spaces, public speeches, parliamentary politics.

Salon Public Happiness invites people who think happiness as something collective, as public, who are active with artistic means in urban struggles in Hamburg and Istanbul. The groups from Hamburg support the inhabitants of the ESSO-Häuser (Esso Houses) and struggle for a social urban transformation. Videoccupy is part of  the multi-facetted Gezi-Taksim-movement. Although the situations in both cities are very different, and the struggles specific, both are subjected to a harsh neoliberal urban transformation.

The invited artists don’t intervene from outside, they much rather act, think, reflect, document, dance, design, plan, produce within movements. They develop languages and imaginations out of the every day life of cities, with and for the people who live in cities.

Esso-Häuser, Hamburg St. Pauli: The block from the 1959 sits in the very heart of St.Pauli, at Spielbudenplatz/Reeperbahn. The modernist building became legendary in the last 20 years – home of clubs like Molotow and Planet Pauli, and of an ESSO petrol station, which acted like a platform, where kids from all over cheaply bought alcohol at night and people of all classes met. The tenants lived in small but affordable flats – some since the house was built, and many young people had their first home in Hamburg here, people who worked in the nightlife, many with migrant backgrounds. The beauty of ESSO-Houses was the wild alteration of it’s cool modernist design by the shop owners. In 2010, just when the houses had started to be really alive, an attractive, real and diverse spot vis-a-vis the Investor’s architectures surrounding it,  the ESSO-houses were bought by a real estate developer, with the clear goal to tear the houses down as fast as possible. A year long struggle started: Tenants supported by the neighborhood, and a resistance, typical for St.Pauli, that combines social questions and struggles with artistic means, football fans, and basis work. The demolition could be slowed down, until, suddenly, in December 2013 the houses were “evacuated” by the police.

Irene Bude and Olaf Sobczak film the ESSO-Häuser, it’s inhabitants, and their struggle since 2010. Irene and Olaf together with the films producer, Steffen Jörg, are members of the Esso-Häuser-Initiative. Most known for their film “Empire St.Pauli” (2009), they tracked down the gentrification processes in St.Pauli so convincingly, that the film became an important part  in shifting the discourse in Hamburg from ignorance to critique. “Empire” was screened first only in locations that are connected to urban conflicts and struggles, thus leaving the stale ground of “documentary” behind by contextualizing the movie and making it sharp as a tool of a different kind of politics. The new film, ESSO-Häuser, carefully shows the poetry of living, the differences and styles of the tenants – and their witty resistance against a seemingly omnipotent investor. 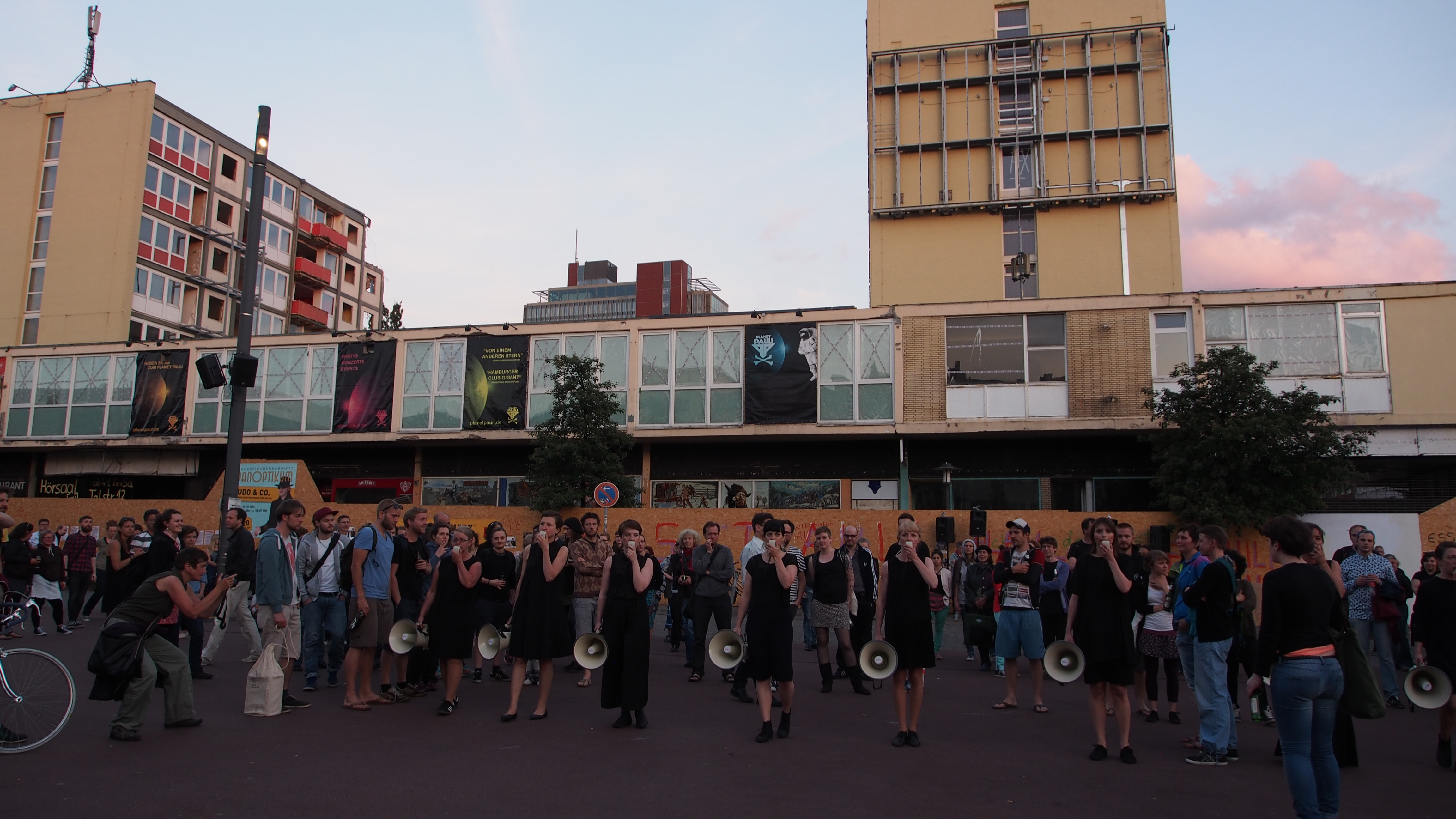 Sylvi Kretzschmar is a performer who researches the history of P.A. – Public Address systems, and how their development formed the ways of Public Speech (and how the same development was connected to spying and surveillance). As a consequence of her research, Sylvi founded the Megafonchoir – a group of women, who intervene with their performances as parts of demonstrations in the Right to the City contexts or anti-racist demonstrations. When the ESSO-Houses were declared to be “liable to collapse”, she made a call for her Requiem for the ESSO-Häuser: Sylvi asked people to call a mailbox and record a statement, a description, a memory of the houses – a sixties block inhabited largely by low-income tenants in the centre of St.Pauli, and bought by a big Real Estate Developer, the Bayerische Hausbau. After the clearing, the investor seemed to get his way.

The requiem plays in a very artful way with the voices from St.Pauli, amplifies them and transforms them into a complex ballet, that echoes the mechanics of street struggles, of being pushed around and resisting, of eventised space productions and of freaking out. The requiem premiered in May in a privatised square in front of the already half demolished former homes.

PlanBude was founded in May 2014, to organise a parallel planning process for a social development of the ESSO-Häuser.  Up till now it is not clear, if Plan Bude will work against the Investors plans – or if the city of Hamburg has the courage to make her promise come true, to organise a real participatory planning process in the community _-with PlanBude as the official planners. The interdisciplinary team of urban planners, neighbours, cultural and social workers and artists develops new tools, to open up the planning process for the big housing complex for the local knowledge. 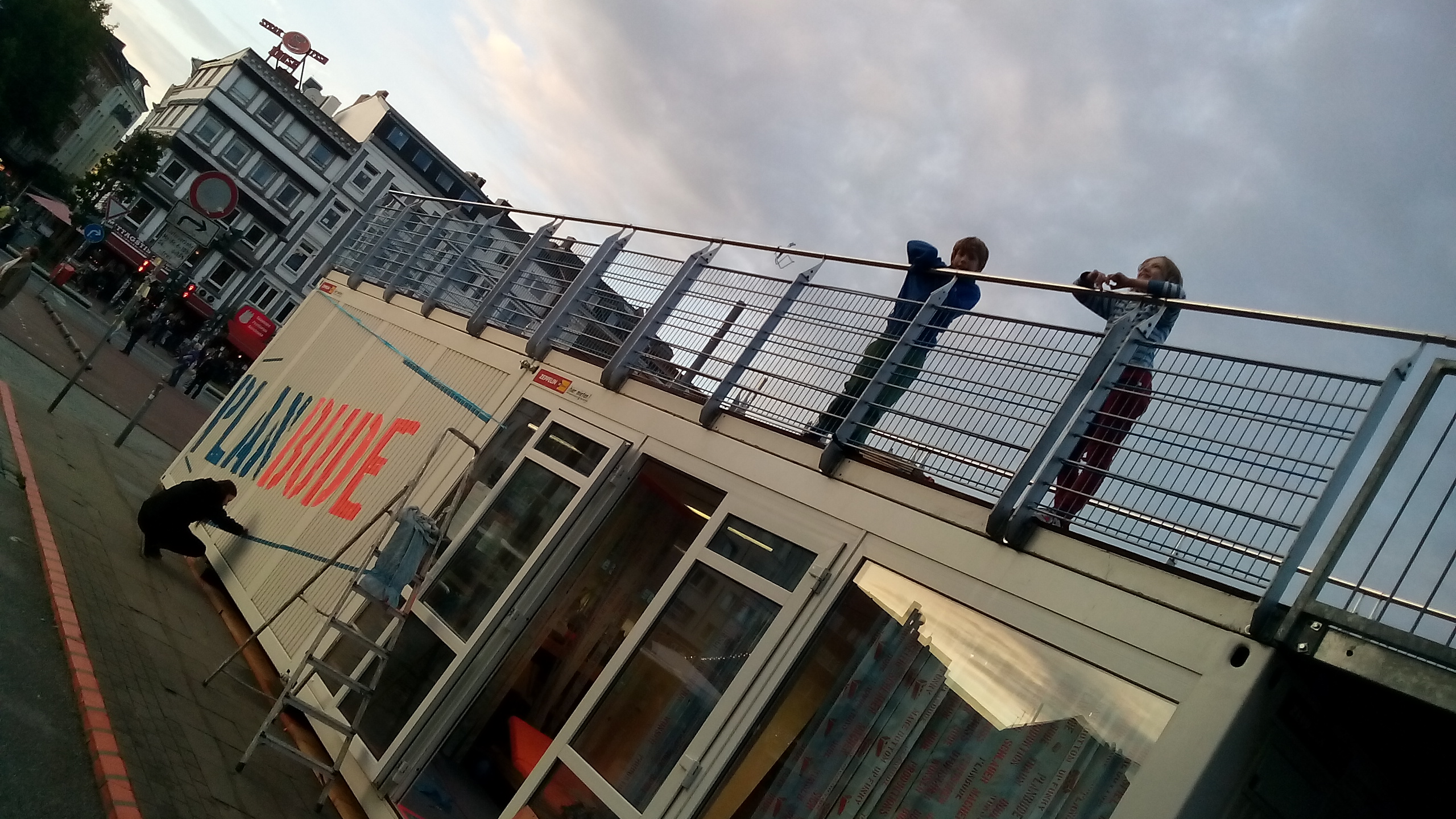 Currently PlanBude develops new types of questionnaires and an open-air.planning office,  with tactical tables and furniture for planning, that make use of urban obstacles, adding new functionalities to a highly contested (privatised) public space. PlanBude believes, that creatve processes today have to work as a platform, in which social, political, and cultural knowledge flow together, collaborate, and develop new imaginations through the local knowledge of city dwellers. PlanBude is currently negotiates with the city about getting the contract to organize the bottom up planning process – which would be a sensation and a step in this situation dominated by investors. Even if PlanBude does not succeed to realize all ideas consequently the group is nevertheless determined to produce a utopian surplus, and a model, how urban planning could work to produce social, interesting, ready to be appropriated by it’s inhabitants, in a bottom-up process.

Videoccupy is a collective from Istanbul, that was founded in the first days of occupygezi. Quickly the group became a collective, set up a studio close to the park, filmed the exploding micropolitics of the Gezi movement, and collected material by other filmmakers. Videoccupy produces videograms – a term borrowed from Harun Farocki – short and precise 3 Minute clips that are distributed through various channels, including social media. Videoccupy refuse to make “the Gezi movie” – and rightly so:  The Spirit left the bottle and can not be squeezed back into known, discussed and consensual formats. The videograms avoid the big iconographic superimages, much rather they focus on specific moments and try to do justice to these. In this way, there is a certain closeness to the method behind Chris Markers “Le fonds de l’air est rouge”, a film mostly made from the leftovers of his colleagues.

A giant part of videoccupy’s impressive archives is used in a rhizomatic way all over the internet, but independently of youtube, vimeo and other questionable multis now also available on the powerful independent platform bak.ma

Even though the public and private spheres are still divided, they are attacked and destroyed at the same time. It is totally unclear, what this means: threat or promise? As videoccupy say: “We see the camera as part of our bodies.”