Can you imagine another country, where people eat together as a form of protest?

The Lady next to me smiles while we indulge in shared food in a public Iftar in Yeniköy Park. More than three hundred people have gathered, an hour away from Istanbul centre by metro and minibus. More than half of the participants are women, of all ages, skin colors, with headscarfs or with hair bleached blonde, in jeans, beautiful summer dresses or Istanbul United T-Shirts. Gezification continues. 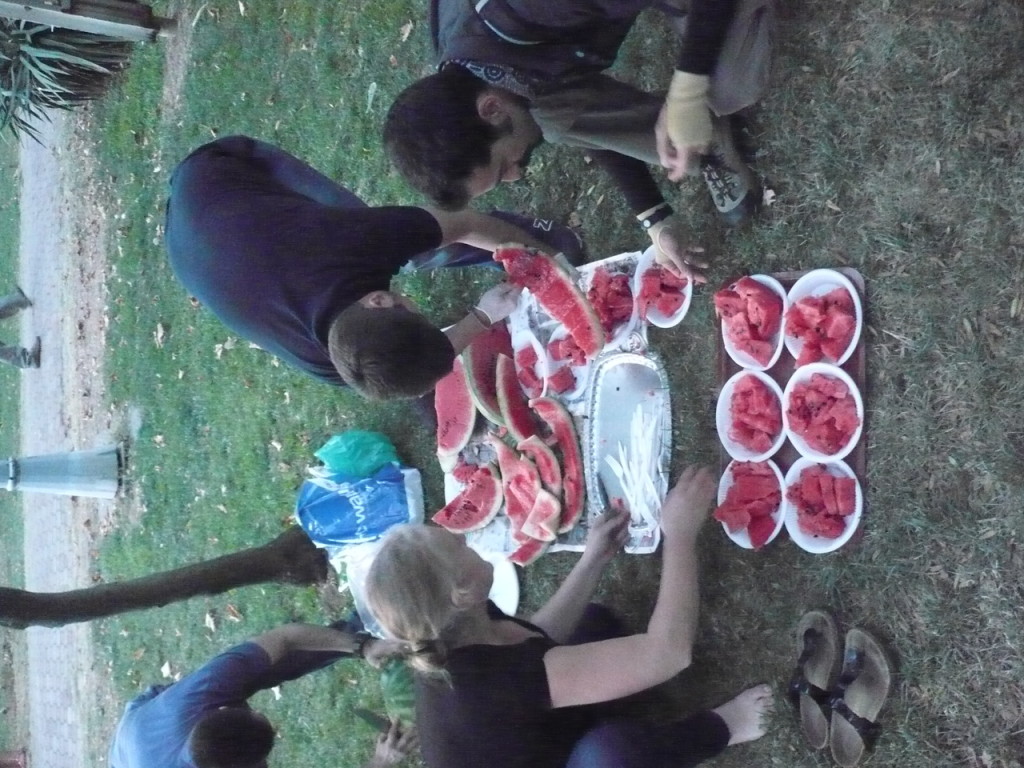 If we can not congregate in Gezi Park, we meet in other parts of town,

a Lady from Besiktas explains. The Iftar, is a continuation of the fasting breaking meal in Ramadan, the anti-capitalist Muslims had first called believers and non-believers to join in to, two weeks ago in Istiklal Street.,

But it’s not only the tactics, the impressive size, the differences of class and faith that come together here*, that constitute the Gezi Spirit. Much rather, it is a new type of moving, of action, which marks the deep change that is announcing itself in the Gezi Taksim movement. It’s power is rooted in everyday activities, which people place in political contexts. 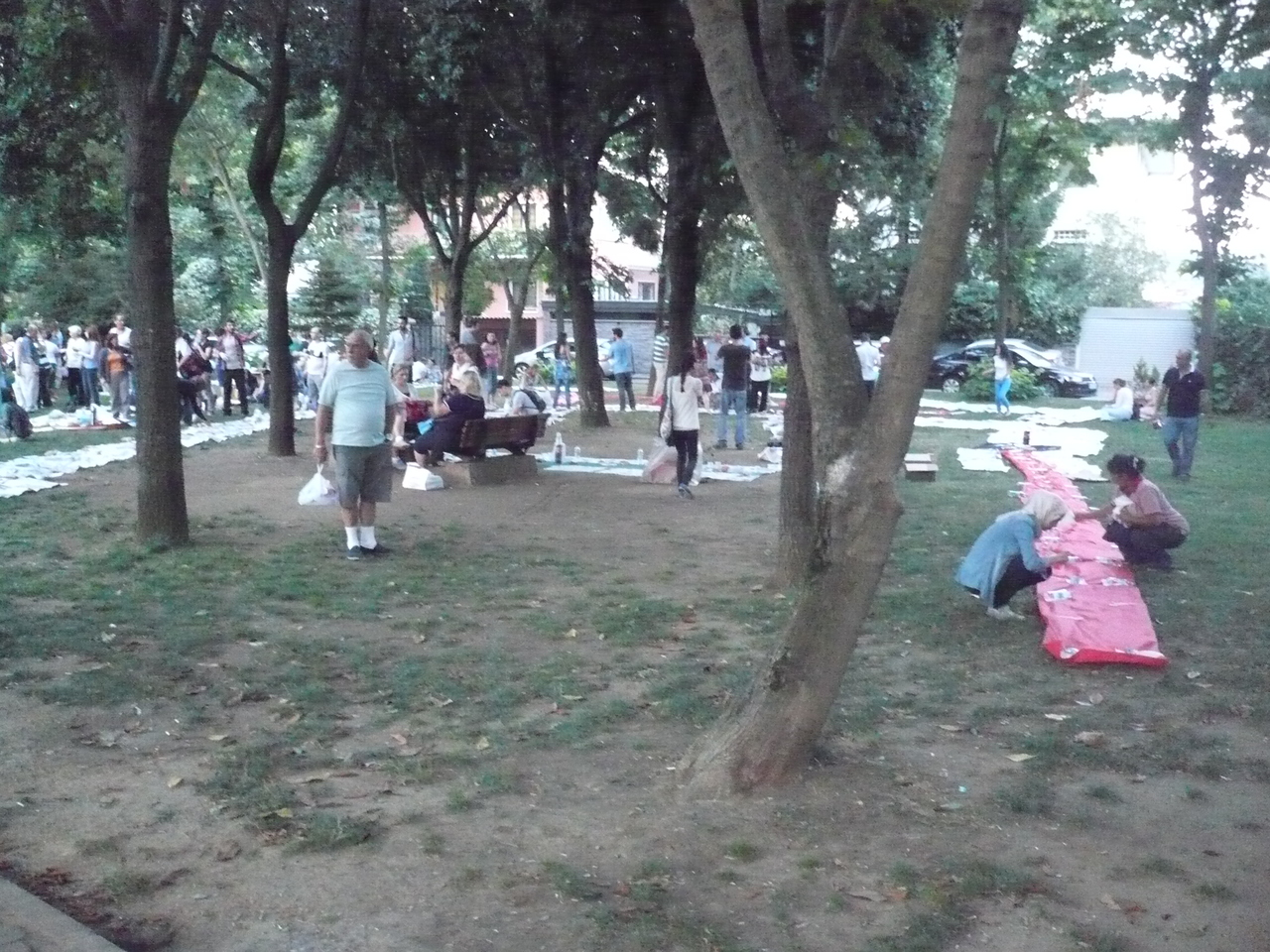 At the Iftar, the conversations flow gently from politics to the personal, from descriptions to reflections. But it’s the presence of the personal, that marks the difference. People brought mostly home cooked food. Everyone here in the park is an expert, contributing, what they can do best: Opposite me a lady has grown everything in her own garden, another one to the left explains to us her recipy of cooking umprocessed raw rice, the most tasty aromatic rice I ever had in my life**.

This shift of context, this going public of private activity, creates the inviting atmosphere of the Gezi Movement. Istanbulites don’t treat collectivity as an issue of party politics or trade union organising – but in a fashion, that extends the closeness, complexity and initmacy of friendship circles. In no time, I, the foreigner, get invited into the Iftar, get seated and minutes later we are in a lively conversation that reminds me of the type of exchange you would have, when a good friend invites you to his house for dinner with a carefully selected round of interesting people.

The delicate woman I talk with first, turns out to be an architect. Quickly we share stories about Hafencity and Galata Port, Mega Turbo Gentrification in Istanbul (she is ashamed about), and real estate corruption. The most knowledgeable  critics of urban policy are right here, and the abilities necessary to change things, meet.

Istanbul is re-inventing togetherness in multifacetted ways, is redefining common in a joyful way, full of love, knowledge and courage. There is a lesson to be learned from this, for the emancipatory movements to evolve around the globe.

I have a theory about why it is Turkey and Istanbul, of all places, that is destined to pioneer this innovation: 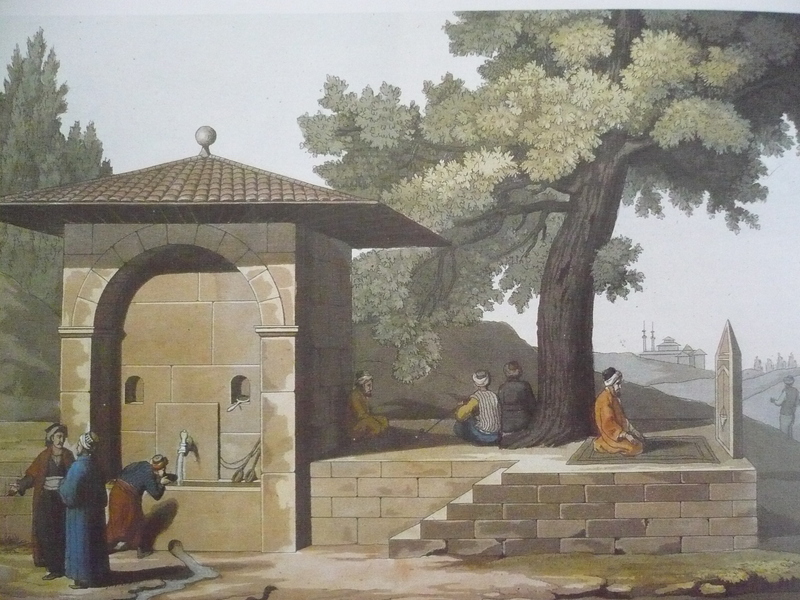 The namazgah, a place of worship, V. Raineri, 19th century

As a form of unpolitical escapism, urban Turks developed a hedonistic culture in the Ottoman Empire, because the governing layer was sealed off and did not allow even the slightest form of participation or discussion of public affairs***: the ranks of administration, army, government alike, were recruited from children, taken away from greek or armenian minority families, raised and educated by the state – an army of Clone Warriors, if there ever was one. In contrast to medieval and early Renaissance Europe, where a public sphere and democratic elements developed and were struggled for gradually with the emergence of cities, this development did not happen under the Ottomans: Their Government was an iron ceiling, impermeable for citizens or lower aristocrats. Thus the thesis, people developed an apolitical attitude and a strong hedonistic culture, an everyday life, where earthly pleasures were enjoyed in big family circles.

Istanbulites developed a specific garden type corresponding with the needs of these citizens. Informal and close to nature, the Ottoman Garden is different from the symmetric, axial, cross shaped garden pattern, that spread with Islam from North India to Morocco. The Bosphorus garden, in contrast,, is made of lawn or meadow, some loosely spread trees, a spring or edged well – and a view on the sea. City dwellers used to form groups of families and friends and commuted from the city to these gardens. The groups would not interact with the other groups, and spent days enjoying nature, food and the company of friends and family****. All these gardens dissappeared in the late nineteenth century. 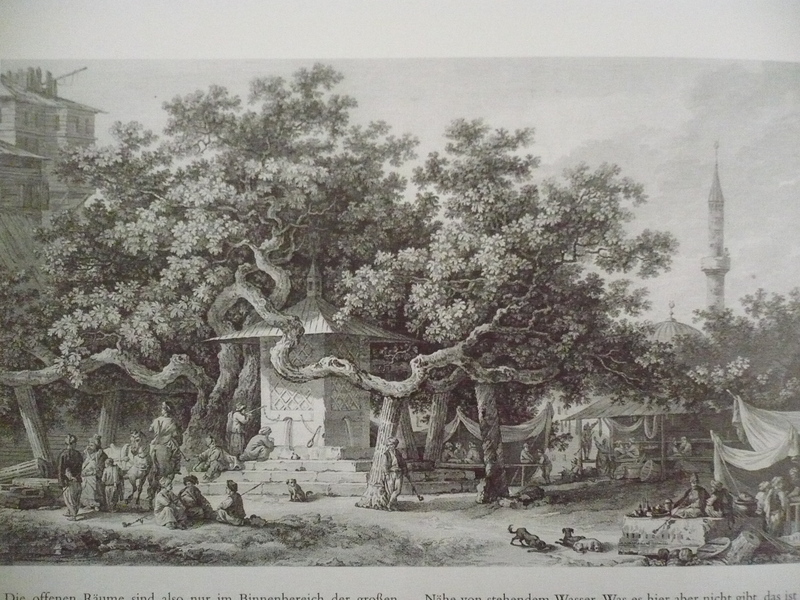 The autocratic structure was inherited by the Turkish Republic to a considerable extend. And oppositional forces reacted, accordingly, with a rather harsh breed of western ideologies and ways of public speech. Is it a wonder, then, that a whole generation turned it’s back on politics, and devoted their lives to going out, videogames and facebook conversations instead?

Now this generation has taken to the streets and and to the few remaining parks, and it has brought back, activated (and altered) forms of sharing and common-ness, that used to be restricted to the private realm.

We had to go public,

a 19 year old student from the private koc University tells me.

We are educated, we are learning all the time, we speak more languages than the president and his government – and he treats us, as if we didn’t know, what we’re doing. We don’t accept to be told how to live, who to marry or not, how many children I should have. I accept girls to wear a headscarf, also to University, if it is her decision and she wants preserve herself to the one she loves. But I don’t accept someone telling me if I am allowed to drink or not. 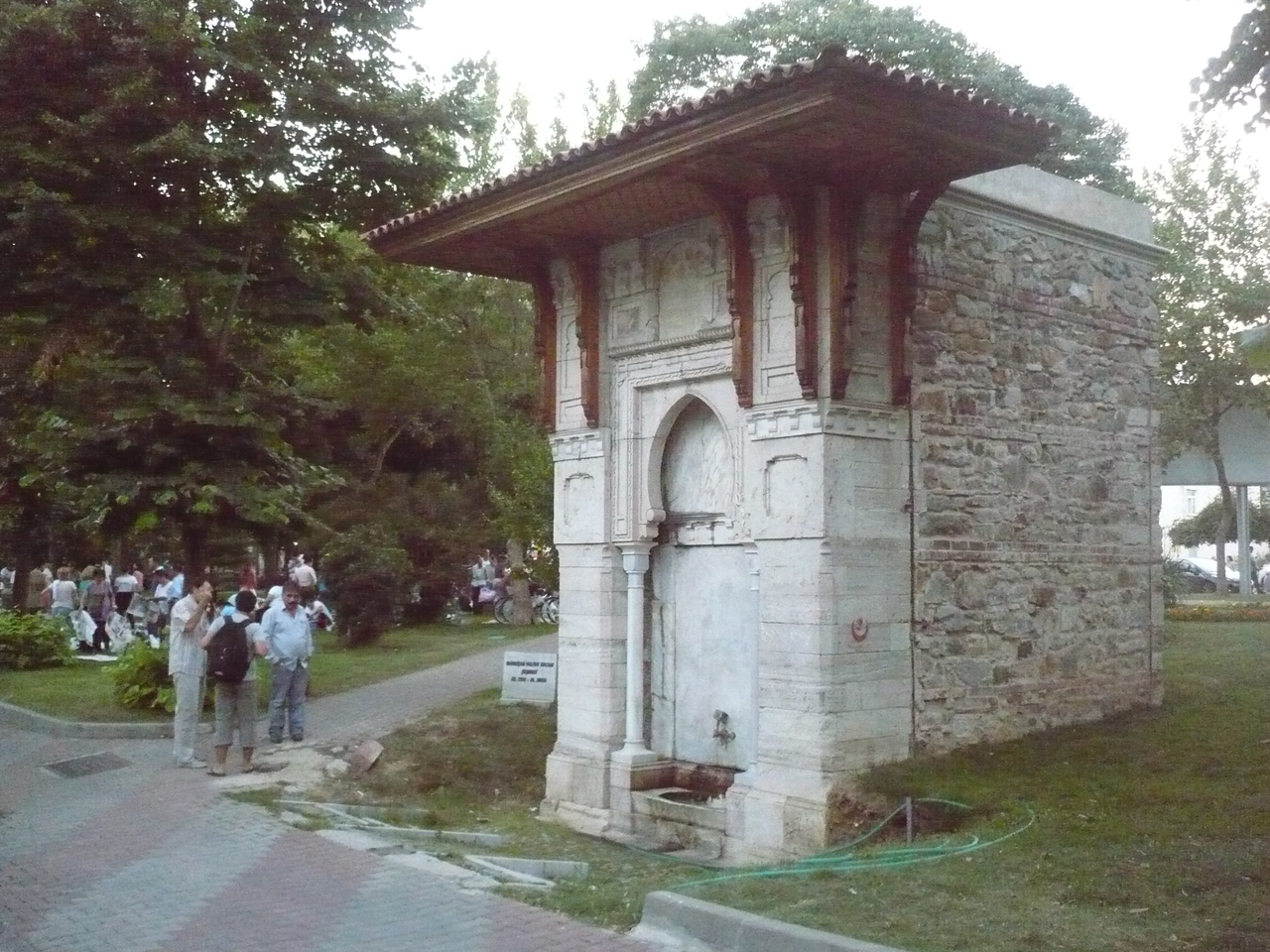 Turkish people don’t have the kind of  problems with alcoholism like Scandinavians, the English or the Germans do. We meet in the streets, we talk and have a drink and have fun, it’s mediterranean culture

a young guy tells me.

At the end of the Iftar, an Anti-Capitalist Muslim gives a speech. The architect translates parts of it to me:

We have to abolish flags, leave them at home. This is about coming together, everyone, and we have to struggle together.

The Anti-Capitalist Muslims are central figures of the protest, and people listen to them carefully. One reason – the long time of repression against pius people – who eventually formed a large part of the AKPs electorate. 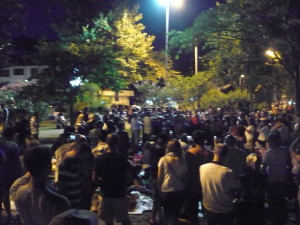 Consequently, it is the muslim critics of the neoliberal politics, who the government fears most – and attacks fiercly. Islamic Banks try to get their books banned. Their views are neither compatible with old school Kemalism. But things get moving, views change and thoughts shift.

The first day of police attacks against the park, my sister went. I had to look after my little brother. She came back at six in the morning and only when we saw on twitter and facebook… we got an idea, of what was going on. I wanted to go the next day, and talked with my Mum. “As a mother”, she said, “I want you to be safe, I care for you and I should tell you to stay home. But as a citizen of this country – you have to go.” That was like “Wow!” to me – if she says that, there is really something serious going on. (…) I don’t like violence and never threw a stone at the police. But when I arrived , barricades were everywhere, cars were burning… It was necessary. Without the damage, no one would listen to us! I am thankful for that! We had to go public.

Her words resonate in my mind. Going Public is active, is a different concept than The Public or Public Opinion, that stale, sterile, bureaucratic concept inherited by the Romans, forever linked to state power and the emergence of private property. All around the globe, the private – public-couple-cum-opposition has structured our spaces, our lives, our thinking, our desires. Wherever it came, it attacked and erased the practice of the commons.

And here is yet another Turkish word we will have to learn: Commons means Müsterekler, and that is the name of the most innovative and cleverly intervening group in the movement.

They continue in other places – on his smartphone, a videoactivist shows me fotos of an action the day befopre. 1000 Müsterekleriniz traveled by boats and yachts to Yassiada, an island near Istanbul, that the government would like to transform into yet another tourist resort. Now still a nearly natural place with beautiful Yale and Kösk, beautiful wooden houses and for centuries the secular building type around Istanbul.

The activists organized a forum with the local house owners and tennants. The owners claimed to be the most important voice, but with the forum, a shared platform of exchange and resistance was built between owners and tennants. The activists had chosen a highly significant space for the meeting – a sportshall, that originally was used to hold the military tribunal against Ex-Prime Minister Menderes, which resulted in his execution.

We chose the place for the forum, to make it clear, that we are aiming for social change, not for the death of the Prime Minister. This is an important message to send out, because Erdogan claims he is being threatened.

The shift from military tribunal to democratic basis forum, from revenge to collective processes of problem solving – neither the press, nor the television report about these moments of deep change. Gill Scott-Herons sentence is still true: The revolution will not be televised.

Neither will the public Iftar in Yeniköy. An older person explains her job at a scientific institute to me. I am a researching in surveillance technology. With our Satellites, I see everything, I can see ten meters deep into the earth. Potentially, all the knowledge is there, in this park, coming together over home made food. These people could take over the whole bakery and run it any time. And they would change it fundamentally. Assuming that you work for the state, I ask someone, aren’t you afraid? –

We all used to be afraid 3 months ago. But not anymore. 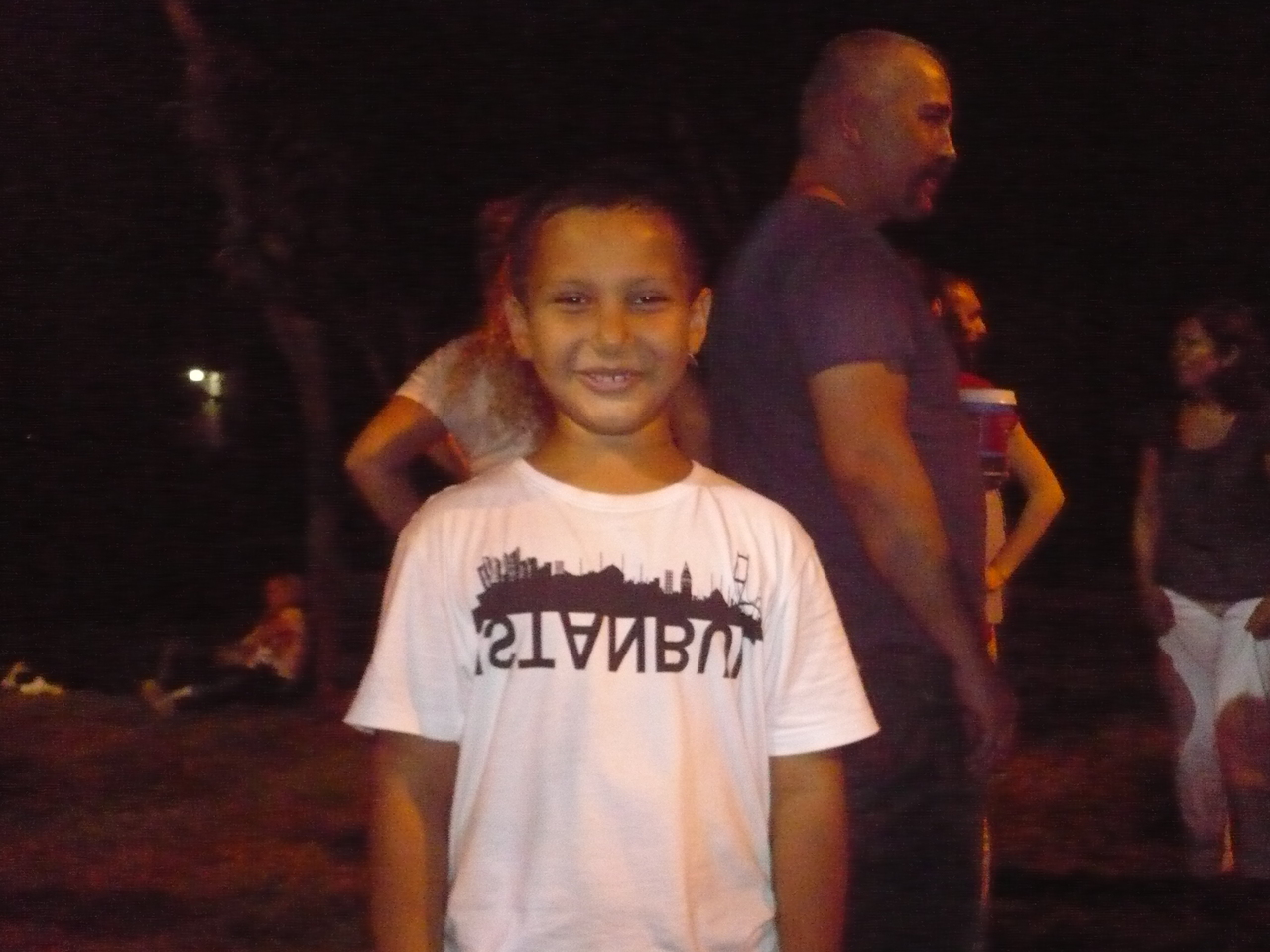 * Some travelled here by 75 Cent Minibus, others by foot from the neighbourhood, and a couple arrived in a brand new Range Rover

*** Without a structured aristocracy and a solid trade-bourgeoisie, the society of the ottoman city mirrors….the instability of accumulation, the insecurity of individuals and families vis a vis an absolute state power.

****  The use the Ottomans made of space, was essentially static and contemplative, yet varied. (here you sit, you sing, you eat and relax). The family or group, an ideal, unexceedable  round , formed a fixed and anonymized presence in space  (although this fixedness tset itself in motion with coaches or boats) and did not entertain relationships with the other groups.  The slow pace of the movements, the “settledness”, the common life, the silence, zthe joy of peace – all that, in turn, influenced the perception of space. The walk turned into a trip to the countryside; whole families or groups of friends occupied a locality for hours, sometimes days, and put up their tents there.. For this reason the number walking paths and lawns rose considerably. Mostly they were natural meadows at the coast of the Golden Horn, and the Bosphorus and the surrounding hills.